“Tell you story three times and no more.” — African proverb

I’d like to share the story of a woman I recently spoke with who was really upset that her 25-year marriage had come to an end. Let’s call her Laura.

As we talked, Laura told me how her former husband had been a narcissist, how he only thought about himself, and how she believed the only reason he had stayed with her for so long was because it was convenient for him—she cleaned the house, cooked the meals, fed and clothed the kids, and provided an audience for the narcissistic stories he indulged in daily.

She had finally had enough and found the courage to leave him.

After listening to her story, I politely enquired. “So Laura, when did you guys split up? How long ago was this?”

I was surprised. I was expecting her to say a few months, or a year maybe, as she was still clearly suffering a lot.

While it can be healthy and cathartic to talk about our struggles with a close friend, a family member or a therapist—to let off steam, to get it off our chest—there comes a point where it becomes self-harming to keep playing these stories over and over in our heads and worse still, to talk about them all the time.

There is great wisdom in the proverb “Tell your story three times and no more.”

Three times is healthy. Or four times even. More than that can be harmful, especially when our sense of identity is tightly wrapped up in tragic tales from the past.

The interesting thing with Laura was that, in the first couple of minutes of our weekly calls, she was always bright and bubbly, with a sparkle in her eyes and a big smile on her face. She looked happy.

But the moment I asked her, “So how has your week been?”, I could literally ‘see’ her picking up the story and putting it on like an old familiar coat. Her demeanour changed, the smile was gone, and her sparkly eyes became tearful as she told me:

“This week has been really hard. I haven’t been sleeping well. Maybe I could have done more to save the marriage… etc etc. The details are not important.

And when I then said to her, “Do you see what happened there? You were all bubbly and happy until I asked you how your week had been. And then, through habit, you abandoned your happiness to pick up your broken story, indulge in it, and make yourself miserable.”

“Do you see how it was self-created… how you suffer when you choose to make the story the focus of your attention?”

Laura’s case is not uncommon. 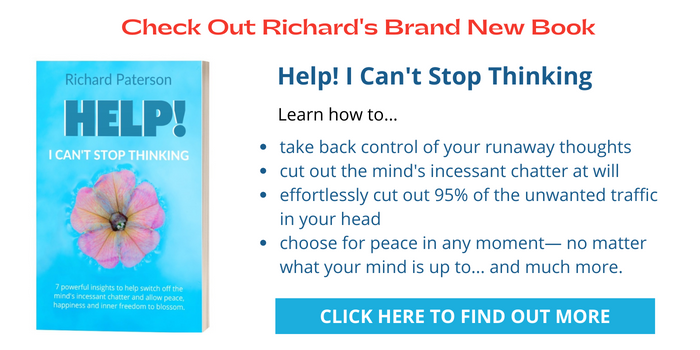 How Often Do You Tell Your Story… to Yourself and Others?

Many of us (I also did this for years) drag our old stories of hurt and regret around like familiar old coats that we wear, ready to offload them on anyone who will listen.

(hint: the first step in breaking free is to consciously stop talking about them).

As we feed our stories more and more (through telling them to ourselves and others), they become an integral part of our identity… of who we believe we are.

We believe that we are the sad, broken little story character, and keep our suffering alive as a result—for years in many cases.

But here’s the good news. Playing these broken records over and over is mostly an unconscious habit. Often, with just a little awareness, and through following a few simple tips, it’s not that hard to let them go. It’s mostly a question of willingness.

Ironically, it’s also common for people who have been making great progress, people on the verge of a big breakthrough, to suddenly find excuses why they can’t continue with our coaching sessions together.

Not because it’s too hard to let go of the past, but precisely the opposite.

When people realise that letting go of the story can be as simple as making a conscious decision to do so, it can be very threatening to the ego’s sense of identity.

“Who would I be then? Maybe I’d actually be happy? Boy, that’s scary. I don’t know how to do that. I’d have to take responsibility for my life. I wouldn’t have any more excuses. There would be no-one to blame for my unhappiness.”

And rather than embracing this new liberated state, people choose to retreat back into familiar territory. It might suck… but at least it’s familiar.

Being free of the mind is a step too far for many people. And that’s an absolutely valid choice. I  avoided it for years… and still do, to some extent.

Our stories are powerful… until we better understand the mechanics of how the mind works and  clearly see that, in truth, it only has as much power as we give it. 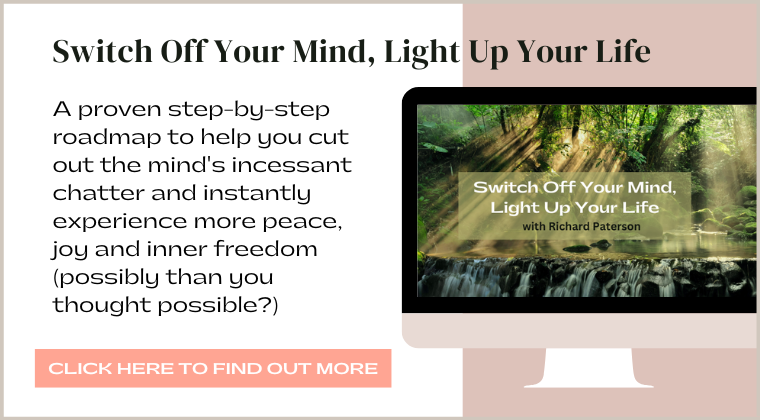 Deciding Not To Tell Your Story Any More

For me, meditation was the tool that changed everything… that, and having proper guidance and support.

Meditation has taught me so many things but, with regard to dropping my stories, there are three particular insights that have made a world of difference:

1. understanding the difference between thoughts and thinking

2. understanding that, without my participation, the mind loses its power

3. understanding that who we really are is far greater than the thoughts, feelings and emotions that pass, like temporary clouds, through our awareness.

I’ll just talk briefly about each of these here as I’ve covered them extensively in other articles on the website.

Understanding the Difference Between Thoughts and Thinking

Thoughts are self-arising. Thinking is a choice.

Thoughts appear by themselves and left alone, quickly pass across our awareness and fade again.

The trouble though, is that we don’t leave them alone. We grab them, chew on them, marinate in them and turn them into stories, which we then unconsciously get lost in.

But here’s the thing; you don’t have to follow the thoughts. You can learn to step back and watch them, without judgement.

Make the whole process conscious. See that you can choose whether to run stories or stay present through, for example, focusing on your breath.

You Are In Charge Of Where You Put Your Attention

The mind only SEEMS to have control over you because you give it power with your attention. You are the one who is in charge of where you put your attention. If you choose to focus on your breath or the sensations in your feet rather than following thoughts, the mind becomes impotent.

You are 100% in charge of whether you get involved with a mind story or not. You can decide to stop thinking in any moment. And, without your participation, the mind is powerless.

You Are Not Your Stories

If you practice meditation for even a short time, you come to recognise that there is a vast field of conscious awareness within you that is not touched by the temporary thoughts, feelings and emotions that pass through it—just as the sky is not affected by the passing clouds.

As you learn to step back and rest in this unchanging field of awareness within (which I call home), and watch the passing thoughts with an attitude of non-judgemental acceptance, they no longer occupy centre-stage in your awareness.

From this vantage point, you can sit back and watch the whole mind circus with curiosity— how the thoughts appear by themselves, the tendency to grab onto them, weave stories out of them— and simply don’t get involved.

It’s really simple… but not easy.

If you’d like my help and support, shoot me an email to richard@thinklessandgrowrich.com and I’d be happy to jump on a Zoom call with you… no strings attached.

My Greatest Humiliation and Greatest Gift

I’ll end with a story from my book “Kick the Thinking Habit” (click on the link to download it for free), which you might find amusing… and maybe inspiring too?

I’ll keep it short here. It’s on page 46 of the book if you want to read the longer version.

Almost 20 years ago, I was on a 6-month meditation retreat with around 100 attendees. Every evening, there would be a meeting where people could share their difficulties, their wins or ask questions.

In the first month or so, I was really struggling with my restless mind and was constantly thinking about leaving. Talk about stories! There was more going on in my head than in a Die Hard movie.

But, during the evening gatherings, whenever I was asked how I was doing, I would put on a plastic smile and lie: “I had a great day”, eager to escape the spotlight as quickly as possible.

And then at some point, I started to be more honest and when asked, I began saying things like, “Man, you won’t believe how shit my day has been. I was so restless, it was awful… blah blah blah…”

It felt liberating to be honest, authentic and transparent, and not to be judged for it.

And then one evening, as I eagerly launched into my tale of woe, my teacher shouted across the room, in front of 100 people:

“Nandisvara, (my monk name) do me a favour and stop going on and on about that broken old story that you wear like a worn out old coat. I’m bored to death hearing it. Do us all a favour and just stop.”

I was stunned. For a few moments, I felt hurt, embarrassed and humiliated to be called out in front of so many people.

And then I started laughing. Suddenly, it was the funniest thing I’d ever heard. And in no time, the whole room burst into uproarious laughter.

My ego was smashed like a broken egg on the floor… and what a gift it was!

And I thought to myself, “ You’re not nearly as bored of my broken old story as I am.”

The brutal take down was exactly the kick in the ass I needed!

So, here’s my question to you.

Are you tired enough yet of dragging these old stories around with you. Are you bored enough to do something about it?

Maybe it wouldn’t be as hard as you think to let go of them? 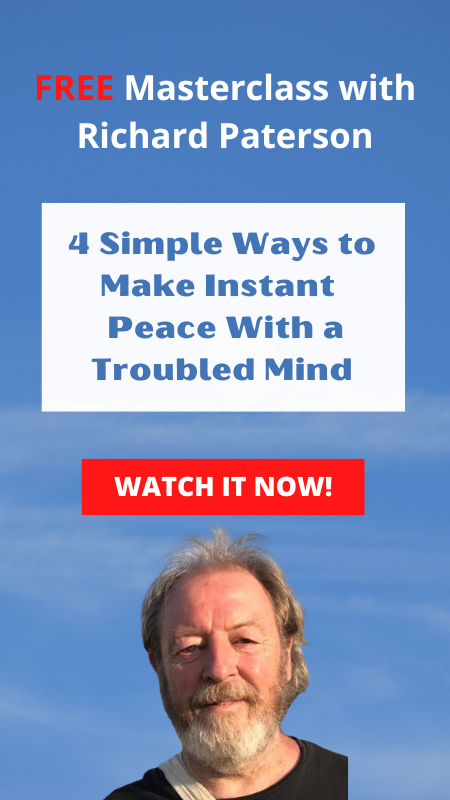 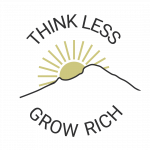 By signing up for this guide, you will also be added to my mailing list. You will receive periodic updates and special offers from me via email. I will not sell or distribute your email address to a third party at any time. View my privacy policy.